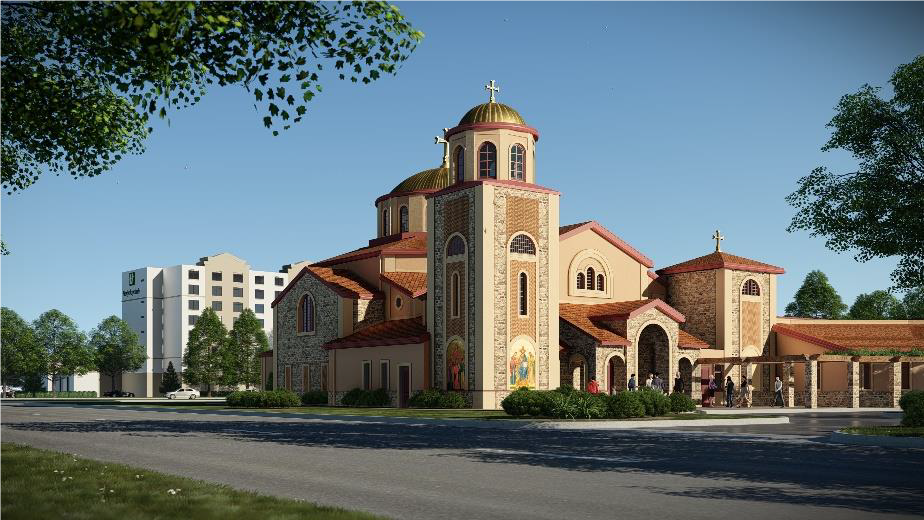 In the 1960s, many Greeks left Chicago and flocked to the suburbs. By the late 1970s, many Greeks began moving further west. Many settled in the area around Elgin. The closest churches in the area were more than a 30-minute drive away. About 100 families — immigrant families, of which most were in the restaurant business — came together to start a church in their area.

Former church secretary Matina Caribacas and her family were among those pioneer families.

"We tried a few times before, but nothing came to fruition. Finally we went to the dioceses and asked for their blessing, then gathered the money to start the community. Through determination and faith, it finally happened."

Andrew Piers came up with the name St. Sophia. - Ms. Matina Carabacas explained. “There wasn’t another St. Sophia Church in the Diocese. There was no opposition, and that became the name of our parish community"

The very first Divine Liturgy was celebrated on September 17, 1978 – the feast day of St. Sophia and her Three Daughters — by Father Theodore Stoupas, in a rented space at Kimball Middle School. The fledgling parish held services there for about four months. They outgrew the facility, and the community rented the auditorium at St. Thomas More Catholic Church. The property at the current location, the former First Assembly of God, was purchased in 1979. The parish moved to its new facility exactly one year after its first Divine Liturgy.

Father Theodore Stoupas was reassigned in 1981. Father Peter Yannacopoulos came, and served the parish until 1985. It was under his tenure that the church was adorned with Byzantine icons and other enhancements to make the edifice look and feel more Greek Orthodox. The Very Reverend Timothy Bakakos led the community from 1985, until the arrival of Father Andrew Karamitos, the current priest, in 1997.

Father Andrew Karamitos was born in Wilmington, DE and grew up in New Jersey. Prior to his assignment to St. Sophia, he served as assistant priest at Assumption (Panagia) in Chicago. He reflected on his early days in the community.

"I was very excited to join this relatively new parish. I was told that this church was the warmest, most inviting, yet humble church in the Metropolis. It was, and it still has that warmth today.” Under his leadership, stewardship continues to grow.

The youth of this community are very involved. They actively volunteer for the festival, and help in many ways. Recently, the community hired a youth director, Andrea Abed. Father spoke about the youth programs under Andrea’s direction.

"She brought more youth to our community, and taken this  program to a new level. Our youth are vibrant. They are dedicated to their parish, and look for more ways to be involved.”

The parish was quickly growing out of its space. In 1990, they broke ground on an addition, which was completed in 1992.

The very first festival took place in 1979.  Father Andrew spoke about the fest.

"Our fest continues to grow. Many people came through here in those 3 days. The majority were not Greek. It’s become known as a big party, with great food, hospitality, excitement, and fun. The volunteers work hard and are tired, but they all say they had fun. It amounts to half our budget, and our parishioners are so committed, they put off vacations until after festival. And all our young adults were part of it.”

Please enter a search term to begin your search.

Click On The Image Below To Make A Secured Donation